Corneal collagen crosslinking is a relatively new procedure that aims to strengthen the cornea in order to slow or halt progression in keratoconus. It achieves this through a chemical reaction using a combination of riboflavin (vitamin B2) and ultraviolet (UVA) light to strengthen the crosslinks between the collagen fibres within the stroma layer of the cornea.

It is currently the only procedure available that can slow or halt progressive keratoconus. Crosslinking may result in a slight flattening of the cornea, leading to small improvements in vision in certain cases. However patients should not expect a reversal in existing vision loss from crosslinking nor should it be considered a cure for keratoconus.

Most patients in Australia with keratoconus are being treated today with crosslinking after being monitored for progression for a period of 3 to 6 months.

Crosslinking should be done to only one eye at a time unless there are exceptional circumstances. Usually the worst eye (the one progressing fastest) is done first.

Crosslinking cannot be performed on patients:

A variety of protocols are being used to perform crosslinking. 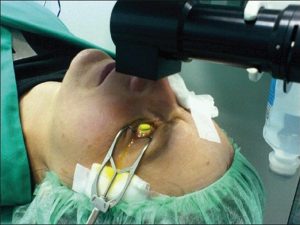 The most widely adopted and extensively studied remains the Dresden protocol. Under the protocol, the epithelium (outer) layer of the cornea is removed. The eye is then soaked in riboflavin drops for about 30 minutes. Riboflavin acts a photosensitiser to create the reaction with the ultraviolet light and absorbs it to protect the endothelium layer of the cornea and the back of the eye from UV damage during the procedure. The cornea is then irradiated with ultraviolet A light for about 30 minutes. Riboflavin drops are inserted regularly during that stage.

Other protocols being adopted today include the epithelium-on method which leaves the epithelium intact to lower the risk of infection and reduce the post-operative pain and healing period for the patient. Accelerated crosslinking involves the use of a stronger UVA source to deliver the same crosslinking effect in a shorter period of time.

Crosslinking under the Dresden protocol appears to be safe and has a success rate of around 70-90% in stabilizing keratoconus, depending on the patient. Younger patients generally have more aggressive keratoconus and may progress again after a period of stabilization. There is less evidence on the safety and efficacy of the other protocols at this time.

Crosslinking is also being done in combination with other procedures including laser refractive surgery and intracorneal rings.

CXL is used less frequently in children and has been studied less than in adults. That being said some studies have performed CXL in children as young as 9 years old and have not found safety of the procedure to be any different from adults. However, how long CXL will last in children and side effects of the procedure are more uncertain than in adults. Although several studies have shown CXL to stop progression in a similar way to adults, some have found it is less effective with 1 in 4 children progressing despite CXL.

Complications include hazing of vision which generally resolves within 12 months, corneal swelling (sometimes permanent), infections and sterile infiltrates or white spots on the cornea. 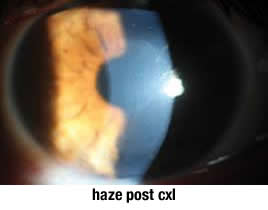 Haze in the cornea is by the most common of these complications and 9 in every 100 patients still are experiencing haze that affects their vision after 12 months, according to some studies.

In about 3 out of every 100 patients having crosslinking, these complications will cause a worsening in vision. In the rare cases in which scarring occurs, vision can be restored only by replacing the entire cornea via corneal transplantation. This is a major operation with more risks, long recovery and the chance of rejection at any time.

Since May 1, 2018, Medicare is paying a benefit of up to $1,200 per eye for crosslinking. The rebate applies to crosslinking for patients with progressive keratoconus. Public patients should now be able to access the operation with no out-of-pocket expense.

Private patients can expect to pay around AUS$2,500-$4,000 per eye for crosslinking. It is not yet clear what rebate private health insurers will offer on crosslinking.

A referral from an optometrist (or GP) is required for an appointment with a corneal surgeon and preferably with a history of progression in the patient's keratoconus.

Other things to know

Your doctor is legally obliged to provide you with a full summary of the operation and its likely outcome and possible side effects and answer all your questions and concerns before you sign an informed consent form for the operation.
Keratoconus Australia emphasizes that crosslinking is not a benign, risk free procedure. Like many corneal surgeons, we believe that the operation should be considered only on an eye that is experiencing progressive keratoconus. Surgeons generally like to monitor a patient's corneas for at least three to six months before deciding to proceed with crosslinking. Each eye should be considered individually as keratoconus usually progresses at different rates and most patients have a "good eye" and a "bad eye."